Energy and sustainable use of fossil fuel is a major focus area in the department. Close to 10 full time faculty and roughly 30 PhD scholars are working on energy related projects. Efficient utilisation of high ash content Indian coal, clean coal technologies, CO2 capture from fossil fuel systems through oxyfuel combustion and chemical looping combustion and better design of gasifiers and combustion systems are being explored actively under conventional energy theme. Flow assurance in oil and gas pipelines and enhanced oil recovery are some of the other research focus related to efficient utilisation of conventional energy. Under un-conventional energy, several faculty members are looking at efficient conversion of biomass to energy and value added chemicals. Development of efficient solar cell prototype and its application in water splitting and CO2 reduction are being explored. Development of efficient fuel cell stack, on-board hydrogen generation, system integration and modelling is also a major thrust area in the department. Research expertise are being built to exploit large amount of natural gas hydrates in Indian offshore for production of methane, a clean burning fossil fuel. Large scale energy storage and retrieval using flow batteries is an active area of research and development. Power plant dynamics and integration of conventional and new energy systems is also an area of interest.

Underground Coal Gasification is being studied from a systematic chemical engineering approach. The focus is on identifying multiple reactions and formulations of appropriate kinetic equations by understanding the flow patterns and modelling of coal cavity formation/growth under in-situ conditions. Development of process model and site characterization issues are also being studied.

Gasifier efficiency under different raw material load is a major concern. Classical thermodynamic approach is being applied for the performance analysis of gasifiers and its preliminary design. Generalized performance charts are being developed at different operating conditions of pressure, gasifying agents and for plasma gasifiers.

Combustion systems often become unstable due to slight changes in operating conditions. Such instabilities include flame extinction, blowout or periodic/cyclic behaviour. One of the objectives is to develop computationally efficient control techniques to regulate such systems at their desired stable steady states.

Clean coal technologies encompass a vast range of technologies to generate electricity using coal in an environmentally friendly way. The focus of departmental activity in this area is on SOx and NOx control, CO2 capture and sequestration options such as oxyfuel combustion and chemical looping combustion and CO2 purification.

Energy from Biomass is considered a sustainable source of energy. Thermochemical conversion of renewable and non-renewable feedstocks to biofuels, chemicals and materials is the major focus. Catalytic and microwave assisted processes are tested and modelled at the lab scale for large scale implementation.

Fuel cells are one of the most attractive energy conversion technologies. They combine hydrogen fuel and oxygen to produce electricity, with water and heat as the by-products. Major focus areas are the development of alternative materials for fuel cells (electrocatalyst, catalyst support, and membrane) and design optimization of bipolar plates and on-board generation of hydrogen through reforming of liquid fuels.

Modeling & Control of Fuel Cell is quite challenging due to complex dynamics between various subsystems and transient operating conditions of fuel cell operation. One of the objective is to build dynamic, computationally efficient and comprehensive models for the entire integrated fuel cell system, by not only optimizing the individual units, but by including the interaction and coupling between the various units in the entire system.

Solar Energy is harnessing of radiant light and heat from sun through solar cells. Improvement in performance of photo-electro-chemical solar cells and monolithic thin

film solar cells are major objectives. Application of these solar cells in water splitting and CO2 reduction are being studied for sustainable energy solutions.

Natural Gas Hydrates are ice like crystalline compounds formed by water and methane. Natural gas hydrate are found stored in the earth in large quantities at par with conventional fossil fuels like coal and oil reserves. Process of methane recovery from such natural reserves has been the prime focus of this research. Flow assurance in oil & gas pipelines and CO2 sequestration through hydrate formation are some of the other focus area.

Energy storage is an important issue for effective use and integration of new renewable energy sources such as wind and solar PV. The focus of the work in this area is on electrochemical energy storage systems such as flow batteries. Both fundamental cell level studies and stack and system development studies are being conducted in the form 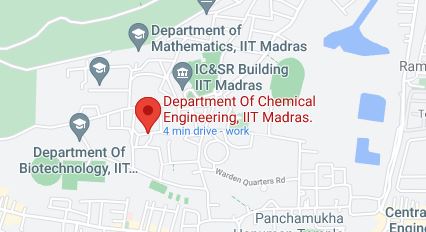